When Aging Characters Look Back: 12 Titles to Read Now

It’s November! Yep, I’m turning another year older. So it’s the perfect time to recommend novels that have a main character who’s, uh, “getting up in years” and where something triggers her memories of long ago—often memories of tragedy and survival.

Of all the novels that alternate between the past and present, those with aging characters who look back are among my favorites. Given the distance of time, a character can examine her life with the wisdom of new eyes.

Check out below a dozen novels I suggest, books filled with secrets and lies, love and betrayals, and regrets and redemption.(Click each title to learn more about the book.)

Orphan Train by Christina Baker Kline –This is a tale of an elderly woman who as a child was sent by rail across the country to an uncertain future, along with other Irish immigrants. Shifting between Depression-era Minnesota and contemporary Maine, it reveals the woman’s painful past—and how, late in life, she befriends a troubled, teenage foster child.

My take: Orphan Train does what past-and-present books do best: it skillfully intertwines two stories that can each stand on their own, but that are made more powerful because of their parallels. 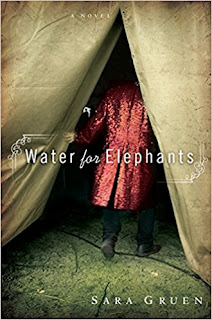 Water for Elephants by Sara Gruen – Ninety-something Jacob Jankowski lives a lonely existence in a nursing home. But when the circus comes to town, it spurs memories of his youth when he ran off with the Benzini Brothers Most Spectacular Show on Earth. Told in flashback, this novel is a story of animals, great love, and heroism.

My take: I didn’t expect this book to make me cry, but it did!

The Nightingale by Kristin Hannah – Alternating between 1990s Oregon and German-occupied, war-torn France, this is a heart-wrenching saga of two sisters, of choices and deception, and of mistakes and sacrifice.

My take: In one word? Unforgettable.

Calling Me Home by Julie Kibler – Eighty-nine-year-old Isabelle McAllister asks her young, African-American hair dresser to take her from Texas back to Cincinnati where she will confess her longest-held secret. This is a tale of forbidden love and tragic consequences in a time of horrendous racial discrimination.

My take: Given this book was partly inspired by the life of the author’s own grandmother, it makes reading it all the more heartbreaking and memorable.

The Wife, the Maid, and the Mistress by Ariel Lawhon – The story begins in a bar in 1969, where Stella Crater is finally ready to reveal what she knows. This historical fiction is inspired by the true mystery of Judge Crater’s disappearance in New York City, during the politically corrupt era of the 1930s.

My take: The author writes the period setting so well, I could hear the jazz music and smell the smoke. She put me right there!

The Seven Husbands of Evelyn Hugo by Taylor Jenkins Reid – Aging and reclusive Evelyn Hugo is at last ready to spill the truth about her scandalous past as a 1950s Hollywood icon. At age 79, she summons to her luxurious Manhattan apartment a virtually unknown journalist and asks her to report on her life . . . after she’s dead.

My take: I was new to Jenkins Reid’s work but found this book a total, effing, page-turner.

The Baker’s Daughter by Sarah McCoy – Spanning sixty years and ranging from Nazi Germany to modern El Paso, Texas, this emotionally-charged story of Elsie Schmidt’s life sheds light on the last year of WWII—and reveals how illegal alien families are handled at the U.S. border.

My take: McCoy’s novel is a wonderful example of how dual narratives can open a reader’s mind to world events in both the past and present.

Secrets of a Charmed Life by Susan Meissner – Set in England and alternating between present day and the 1940s, the story unfolds when an American scholar interviews Isabel MacFarland, an elderly woman with long-held secrets of the choices she made during the war—choices driven by youthful ambition and the terrible destruction that Hitler hurled on London.

My take: Meissner brings great empathy to her characters; you feel the protagonist’s internal conflict as she wrestles with unimaginable choices.

The House at Riverton by Kate Morton – It’s the summer of 1924 in England. Grace Bradley is a servant for a family hosting a glittering party at their country estate. Only when Grace is ninety-eight years old and living in a nursing home—and a film director requests a visit—will she be driven to speak of the long-ago night in which a poet shot himself at the party. . . .

My take: This novel marks Morton’s literary debut, and I’ve rushed to read every one of her books since.

The Thirteenth Tale by Diane Setterfield – Vida Winter is a renowned, reclusive author when, now that she’s old and ailing, she contacts a bookseller’s daughter to whom she’ll finally tell her life’s story. But does she reveal the whole truth?

The Fortunate Ones by Ellen Umansky – Before WWII, the Zimmers, a Viennese Jewish family, owned a beloved painting. The Soutine painting eventually makes its way to America. Many years later, Rose Zimmer, recalls the days of her childhood during the war, while a young woman in modern L.A. also mourns the loss of the Soutine (for the painting’s gone missing again). Can the two women band together to find the lost work of art?

My take: I enjoy books where I’m forced to ask: to whom does this painting really belong? In this vein, another book to try is Jojo Moyes’ The Girl You Left Behind.

Along the Infinite Sea by Beatriz Williams – When a rare, vintage Mercedes sells at auction, two women will become inextricably connected . . . one is a young beauty in the 1960s with a scandalous secret, and the other carries secrets of her own from a time when the German automobile rolled through Nazi Europe.

My take: Beatriz Williams never fails to draw me in with a spunky character’s voice, beginning in paragraph one!

The list could go on. What past-and-present books with aging characters do you love?

To receive notifications of my blog posts, visit any page in the blog while you're not on a mobile device. Enter your email address in the Subscribe box.
Posted by Tori Whitaker at 5:23 PM

Tori Whitaker
I am a writer, a book addict, and a history junkie living in Atlanta. I fell in love with “the olden days” at the age of five, when my Poppy and Memaw took me to a museum where I stood before a Ford Model T. I read widely now, but I have to get my fix of novels that alternate between the past and the present. Find book reviews at this blog, and follow my weekly tweets every Sunday @ToriLWhitaker.